It’s great to have the opportunity to write to you in the Meridian for my third time.

I can say that in our first 4 months of serving in the current EXCOM considerable work has been undertaken by EXCOM, the Committees, Taskforces and indeed Trustee/IMC’s so my thanks go to all of their volunteer efforts.

You must have all read the announcement pertaining to the vote on the Johannesburg congress resolutions. This was well received as it made clearer to me the steps and tasks I should follow and perform during the coming period.

Your involvement and the involvement of the committees and their chairs in the implementation is a key factor towards us all achieving the results satisfactorily.

As Treasurer of ICMCI, this has been a busy period. With the move of our Secretariat from the UK to the Netherlands, we have had to re-establish our financial reporting. I am pleased to report that this is well under way, and regular financial reporting will be established by the time to read this.
Your new Finance Committee has been hard at work. We meet at least monthly, and work continues between meetings. We have two main duties. The first is to act as stewards of ICMCI funds, to be sure it is collected, properly used, and the results reported.

When is it?
– 2014 ICMCI Conference: September 22-23, 2014
– 2014 ICMCI Annual Meeting: September 24-27, 2014
– Post Meeting Tour: September 27-29, 2014
The conference venue will be the Ramada Seoul Hotel, the very next place to one of the World Heritage Park and the conference & hotel is just the same place for the convenience with the very special price for our ICMCI brothers and sisters. 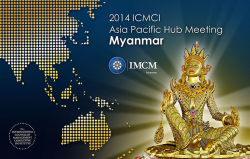 Forward-thinking companies are seeking out untapped markets to grow their business. After Myanmar ended nearly 50 years of direct military rule, Myanmar has pushed the door wide open for foreign investments into this resource rich country. And this is your chance to discover the new frontier.

A note from the Marketing Committee

The Marketing Committee of ICMCI is developing a multi-pronged marketing campaign to start soon in 2014. This year’s campaign and future years will work to develop a better understanding of the value of, plus noticeable public “presence” for, the CMC designation; along with the extended credibility of local IMC’s and their CMC designation because it is part of a global organization – ICMCI.

On February 20th and 21st, eighteen international Management Consultants were hosted in Milan by Roberto Ravaglia, on behalf of UNI (the Italian body for Unification), at the presence of Anna Caterina Rossi, as a representative of ISO (International Standard Organization). The purpose of the meeting was to start the process of developing standards and guidance in the field of Management Consultancy at world level, under the ISO umbrella. This process, that should last 36 months, has taken the European Norms EN 16114 (approved in 2011) as a starting ground.

HEJUN consulting group, the largest consulting company in China and the world’s first CMC firm, held its annual convention in Beijing on 11th and 12th February, 2014. The theme of the event was “Pursuing Dreams with Hejun in the Year of the Horse”. This event was one of the three mandatory annual learning gatherings. Senior staff turned out in almost full force in a packed auditorium for the event, with many staff participating through live webcast.

Mr Liu Jiheng, the CEO, delivered the 2013 annual work report and 2014 work direction. Mr Wang Mingfu, the Chairman of the Board, detailed the trends and directions of HEJUN. Various other speakers shared views on the strategic issues confronting China, the consulting industrym, and HEJUN.

An annoucement from CMC Denmark

In accordance with the resolution recently adopted by ICMCI I have the pleasure informing you that the Danish institute has changed its name from the Danish Institute for Certified Management Consultants (DICMC) to CMC Denmark at the general meeting held last week on February 20th.

The Executive Committee Meeting for 2014 ICMCI Conference and Congress

On Wednesday 19 February 2014, the executive committee for the 2014 ICMCI Conference and Congress attended the 3rd meeting to prepare and discuss the proposed main issues which are to successfully host the 2014 ICMCI Conference and Congress on September 22~27, 2014.
We are going to arrange next meeting schedule to make a decision in regards to major issues.

Moreover, people who has got CMC qualification attended a seminar, 22th February 2014. Around 50 out of a total 207 members attended the seminar in order to suggest an alternative of 2014 ICMCI Conference and Annual Meeting. We discussed about the issue how to invigorate the IMC Korea properly and also it was pleased to take an opportunity to exchange mutual opinions about getting significant synergy effects to CMC members through 2014 ICMCI Conference and Congress.

An update from Cyprus Institute of Certified Management Consultants

The Cyprus Institute of Certified Management Consultants has been very active in promoting the CMC title in both the public and private sectors of Cyprus. Members of the board, headed by the Chairman, have held a number of promotional meetings with key persons in Government, Financial Services Institutions, Private Sector Secretariats and other major Management Consulting buyers, with an excellent response.

AMCOR (The Romanian Management Consultancies Association) had organized, between the 15th May and 1st December, the first edition of AMCOR Awards. The competition acknowledges excellence in the Romanian management consultancy and business market.
The consultancy missions enrolled in the contest were evaluated according to their: commercial performance, strategic strength, quality of the consultancy/solution, efficiency and the effects on regional and national economy.

I’d like to take this opportunity to wish all our IMC New Zealand members and associates a successful and prosperous 2014.

2013 was a busy year for IMC New Zealand Council with a number of projects being progressed:

To know more about our competition and to get your recognition in our newsletter, please follow us on Twitter and LinkedIn.