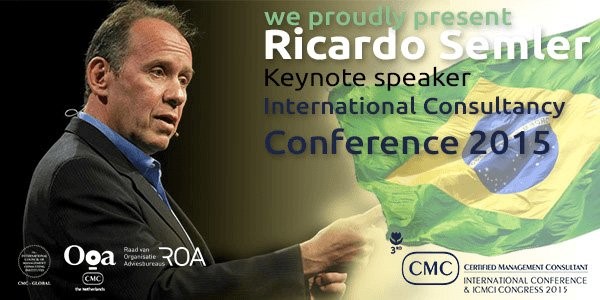 SEMLER REFLECTS ON THE CONSULTING FIRM OF THE FUTURE
23 September 2015 Consultancy.uk

Yesterday the 2015 edition of the International Consultancy Conference kicked-off in Noordwijk, the Netherlands. Today, on the second day of the global congress, Ricardo Semler – an entrepreneur, management guru and creator of the ‘The Semco Way’ (a well-known management approach) – will provide a keynote presentation. In the run-up to his keynote Consultancy.uk spoke with Semler on the change that is anxiously hovering above the world of consulting.

Over the past years the consulting industry has seen a wave of change hit the market, affecting both large and small firms, as well as independent consultants. On the first day of the International Consultancy Conference several trends and developments dominated the stage, including the growing democratisation of previously exclusive knowledge, the impact of digital/online, changing client behaviour and pressure on fees/rates, to name a few. The new forces in the marketplace are obliging firms to adapt to the new environment – if not they face the danger of succumbing to what has been dubbed as the ‘new normal’. It are not just the small, or financially weaker firms that may find themselves in the danger zone, the fate of illustrious firms such as Monitor (acquired by Deloitte after bankruptcy), Booz & Company (poached by PwC for a reported $1 billion) and LECG Corporation (liquidated in 2011) highlights that the speed and impact of change – if not anticipated for – comes with a hefty price tag.

According to Semler, a management guru renowned for his thought leadership on leadership and organisation, consulting firms, much as business schools and giant companies, still are predominantly turned towards the past. “They need to change their outlook quickly,” he says, adding that the industry finds itself on “the cusp of change in the next few years”, referring to a Harvard Business Review article from 2013 (‘Consulting on the Cusp of Disruption’) which played a major role in boosting the industry’s awareness on the disruption looming around the corner. “The protection of billeable hours will be increasingly difficult, margins will fall, and consulting will have to open their arms to new forms of creating and charging for value, such as Apps, fees per use or employee,” says Semler, “and all of this is disturbing”.